We offer full-day programs during out-of-school time, like on professional development days and federal holidays, as well as during school breaks.

We also partner with schools and school communities to connect students to their neighborhoods with curriculum-aligned activities relating to science, history, math, art, engineering, and writing, and to train teachers in outdoor learning. 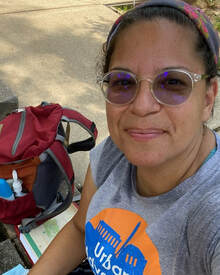 ​Elana Mintz, Executive Director. Elana is the founder and executive director of Urban Adventure Squad/Urban Learning and Teaching Center, a nonprofit, 501(c)3, education organization based in Washington, DC. She began UAS in 2014 to support families on days when schools were closed, so that parents/guardians could go to work and children could learn about environmental science, history, the arts, architecture, and much more while they explored neighborhoods, greenspaces, and waterways. Today, Elana oversees the organization's efforts to support students and teachers by bringing curriculum-aligned, equitable outdoor learning to schools and green spaces in every D.C. ward.

In 2018, UAS was awarded its first grant: a $20,000 Community Stormwater Solutions Grant from the DC Department of Energy and Environment (DOEE) to develop and implement a curriculum for kindergarten through fifth grades on "D.C.'s Hidden Waterways" at Elsie Whitlow Stokes Community Freedom Public Charter School in Brookland. Since then, the organization has won grants supporting its projects and programs, including from Learn24/the Office of the Deputy Mayor for Education (DC), National Geographic, the Chesapeake Bay Trust, and the Nora Roberts Foundation. In 2021, Urban Adventure Squad was awarded a $60,000 grant from DOEE for "Reimagining the Field Trip: Meaningful Watershed Education Starts in Your Neighborhood," an outdoor learning initiative in partnership with three DC public schools.

Elana spent over 20 years in editorial and communications positions at CNA, the Brookings Institution, the National Conference of State Legislatures, and Congressional Quarterly. She serves on the DC Coalition for Equitable Outdoor Education and is a member of the Exhibit Advisory Team for "Our Places: Connecting People & Nature," which opens in July 2022 at the Smithsonian's National Museum of Natural History. Her opinion pieces, with co-authors Doug Siglin and Emily Gasoi, have been published in The Washington Post and The DC Line. Elana's two older children were founding members of Urban Adventure Squad, and she loves a good walk.
Eric Glantz, Board Treasurer. Eric is an audit partner at Raffa, Inc., and an expert in nonprofit accounting audits. At Raffa, he manages audit and tax engagements, and consulting on business, accounting, and tax issues specific to nonprofits. Eric joined Raffa in 2009. He has assisted clients with the implementation of accounting systems, including design and implementations of a chart of accounts, consulted on OMB Circulars A-133 and A-122 compliance requirements for his nonprofit clients with significant government funding, and provided tax consulting on unrelated business income tax issues. He also has industry experience in real estate, insurance and manufacturing, as well as employee benefit plans. Some of Eric’s current clients include World Hope International; Goodwill of Greater Washington; Military Order of the Purple Heart Service Foundation; YMCA of the Metropolitan Washington Area; YWCA of the National Capital Area; and the National Association of College and University Business Officers.

As an entrepreneur, Eric was a partner in a public accounting practice, where he was responsible for the management of the firm’s audit and business taxation practices. His responsibilities included managing audit and tax engagements and consulting on business and accounting issues to both for-profit and nonprofit entities. Eric started his professional career with PricewaterhouseCoopers.

Eric is a certified public accountant licensed in Maryland and Washington, D.C. He received his bachelor of science degree in accounting and international business from Pennsylvania State University and a master of business administration with an emphasis on entrepreneurship and finance from the University of Southern California. Eric also currently serves on the board of directors of the Round House Theatre in Bethesda, Maryland.
Nathan Slusher, Board Secretary. Nathan Slusher is Director of Career Education and Outreach at the American University Career Center, where he leads a team of six talented and dedicated professionals who provide career advising to more than 3600 students in two schools, and who are responsible for career education programming and marketing and communications to more than 7600 students across four schools. He previously served as director of academic and career advising in AU’s School of International Service and associate director of academic advising in the Elliott School of International Affairs at George Washington University. In addition to his work in higher education, Nathan has professional experience in museum, public school, and church settings. Nathan holds professional memberships with the National Association of Colleges and Employers (NACE) and the National Student Employment Association (NSEA), and he is the DC-MD-DE regional representative for the Northeast Association of Student Employment Administrators (NEASEA). A native Buckeye, he completed a B.S. and an M.Ed. at The Ohio State University.
Catherine Brown, Board Member. Catherine is vice president of Education Policy at the Center for American Progress. Previously, she served as the vice president of policy at Teach for America and as a senior consultant for Leadership for Educational Equity. Prior to her role at Teach for America, Catherine served as senior education policy adviser for the House Committee on Education and Labor, where she advised Chairman George Miller (D-CA). In 2008, Catherine served as the domestic policy adviser for presidential candidate Hillary Clinton.

Earlier in her career, Catherine directed Teach for America’s Early Childhood Initiative and served as a legislative assistant for both then-Sen. Hillary Clinton (D-NY) and Rep. Jim Langevin (D-RI), as well as a research assistant at Mathematica Policy Research in New Jersey. Brown received her bachelor’s degree from Smith College and holds a master’s in public policy from the Kennedy School of Government at Harvard University.
Arati Karnik, M.D., Board Member. Arati is a family medicine physician and clinical faculty at Chestnut Hill Family Practice’s Residency Program, where she was Teacher of the Year in 2011 and 2014. She attended medical school at Temple University and completed her training, and then a Faculty Development Fellowship, at Montefiore Medical Center’s Department of Family and Social Medicine. Arati’s educational interests include evidence-based medicine, clinical teaching, and enhancing ambulatory medicine curricula. She is also interested in integrative medicine and has completed acupuncture training. Clinically, she wants to continue caring for the underserved and addressing health disparities. Arati is a member of the American Academy of Family Physicians, Physicians for a National Healthcare Plan, and the Society of Teachers of Family Medicine.

Amanda Ripley, Board Member.  is a New York Times bestselling author, an investigative journalist and host of the Slate podcast How To! Amanda’s most recent book is High Conflict: Why We Get Trapped and How We Get Out. Her previous books include The Unthinkable: Who Survives When Disaster Strikes—and Why and The Smartest Kids in the World—and How They Got That Way, which was also turned into a documentary film.

For Time and The Atlantic, she has written cover stories on the primacy of sports in American high schools, the college of the future, and the science of motivating children. She has visited schools on four continents and interviewed hundreds of kids, teachers and parents. Her work has also appeared in the New York Times, the Washington Post, the Wall Street Journal, Slate, Politico, the Guardian, the Harvard Business Review and the Times of London. Amanda’s son was a founding member of Urban Adventure Squad.
Tamar Shapiro, Board Member. Tamar Shapiro is the Chief Executive Officer of Rail~Volution, a leading North American transit, equity, and community development organization. Before her appointment at Rail~Volution, she was a Senior Manager at the New Urban Mobility Alliance (NUMO) based in Washington, DC. She has two decades of experience working on policies and programs related to land use, housing, transportation, and economic development in the United States and Europe.

​Prior to joining NUMO, Tamar was a Non-Resident Fellow at the Urban Institute, based in Leipzig, Germany. Tamar is also the former President and CEO of the Center for Community Progress in Washington, DC, an organization dedicated to helping cities across the U.S. address property vacancy and abandonment and build strong, stable neighborhoods for and with residents.

Before joining Community Progress, Tamar was Senior Director of Urban and Social Policy at the German Marshall Fund of the United States, where she managed transatlantic urban policy programs with a particular focus on the revitalization of older, industrial cities. Previously, Tamar served as the Director of the Governors’ Institute on Community Design at Smart Growth America. In this role, she advised governors and their cabinet officials on state policies related to urban development and transportation.  An attorney by training, Tamar Shapiro also worked at Klein Hornig, LLP, a law firm specialized in affordable housing development.

Tamar received a J.D. from Harvard Law School, an M.Phil. in European Studies from the University of Cambridge, and a B.A. from Harvard College.  She was also the recipient of a McCloy Fellowship in Environmental Affairs to conduct a 2010 research project on vacant property policies in former East Germany. In 1999-2000, she was a Robert Bosch Foundation Fellow in Berlin and worked at the Berlin Administration on Urban Planning and Environment as well as the German Institute for Urban Affairs. She is a member of the board of Next City. 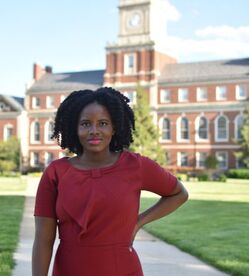 Dr. Brielle Brookins, Ph.D., is a trained research scientist who currently works as a professional development specialist with the RISE Initiative at D.C. Public Schools, where she manages the development of micro-credentials, asynchronous professional learning courses. Prior to her role at DCPS, she spent 5 years as a part of the Research and Evaluation team at Capstone Institute at Howard University, an organization that provides professional development to K-16 educators, and taught collegiate psychology courses at Howard University, Marymount University, and Montgomery College. Her passion is her research which examines the role that culture plays in the efficacy of instructional practices and pedagogy. Specifically, she investigates how culturally-congruent instruction can increase positive socio-emotional outcomes and academic performance for African-American students. 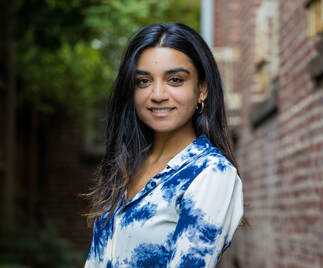 Myra Khan is a Research Analyst in the Education Global Practice at the World Bank, and is an international education specialist with 10 years experience of designing and implementing education projects all over the world. She has worked on a variety of education projects across countries in Africa, the Middle East, South Asia, Eastern Europe, and East Asia, consulting with education ministries and conducting research. She was twice awarded an internal grant to design and implement a project-based learning, socio-emotional skills development pilot project for refugee youth. She currently works in the Front Office team where she focuses on the Education Practice's portfolio management, and also girls' education, among other special topics. Myra received her Master’s in International Education Policy from Harvard University, and prior to this worked as a Program Officer at Teach For Pakistan.